Beyond the Nest Reviews BlackFriars' The Last Night of Ballyhoo 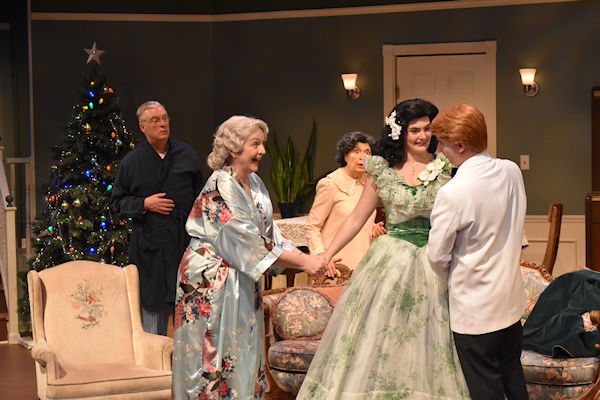 The Last Night of Ballyhoo, written by Tony, Oscar, and Pulitzer Prize-winning writer Alfred Uhry and based loosely on his personal experience, twinkles with situational humor. Uhry is probably best known for his work Driving Miss Daisy, which premiered off-Broadway, and which he later adapted into a film.

We join the Levy/Freitag household in Atlanta as Ballyhoo approaches. This event is hailed as the biggest social gala of the season and a sort of German-Jewish debutante ball.

Uncle Adolph, bachelor, ersatz patriarch of the clan, and owner of a bedding factory, is the breadwinner for his widowed sister Beulah (Boo), her daughter Lala, his widowed sister-in-law Reba, and Reba’s daughter Sunny. The year is 1939. Hitler and war loom on the national horizon, but closer to home, family members are far more concerned about the everyday matters of maids quitting, dates for daughters to go to Ballyhoo, and whether or not, a star on the Hanukkah bush makes it “too Christian.”

While this is a Jewish family of German descent, their loyalties are far more Southern than Jewish. It is not until Brooklyn Jew Joe Farkas appears in their midst to work for Uncle Adolph and woo one daughter that we discover antisemitism comes in all flavors.

Director Fred Nuernberg leverages this cohesive cast’s rapport and strengths to great effect. Peter Doyle’s Adolph gets more laughter from one well-placed snort or derisive look than some standup comedians get from an entire set. As Beulah (Boo) Levy, the overbearing Southern Matriarch who really rules the roost, Pam Feicht  is a dynamo. Vicki Casarett, as Reba, brings warmth and compassion to the household, as well as some choice laughter.

Boo’s daughter Lala Levy is enamored of the recently-released film Gone with the Wind. From her flirty under-lash glances to her sassy Southern belle demeanor, Natalie LeClair is just one fiddle-dee-dee away from Scarlett O'Hara. As her more open-minded and intellectual cousin Sunny, Emily Mahoney endows her character with charm, grace and depth.

Just as Lala and Sunny create dynamic contrast, so do their suitors. Edward Rubenacker, as the red-haired Peachy Weil, gives his character a swaggering, over-the-top personality that draws Lala like bees to honey, while Eric Schutt’s more serious, thoughtful, and religiously-grounded Joe seems an ideal match for Sunny. Joe manages to draw out of the darkness the Levy/Freitag family’s long-lapsed heritage.

The Last Night of Ballyhoo gently touches upon recognition and acceptance of heritage, observance of religious traditions, and the subject of bigotry. But at core, it's a play about family, love, and life.  If you're looking for a light-hearted and fun show that will leave you feeling uplifted, don't miss this production!

The Last Night of Ballyhoo can be seen onstage at Blackfriars through December 31. For more information and tickets, cllick here.