Beyond the Nest Reviews Blackfriars NEXT TO NORMAL 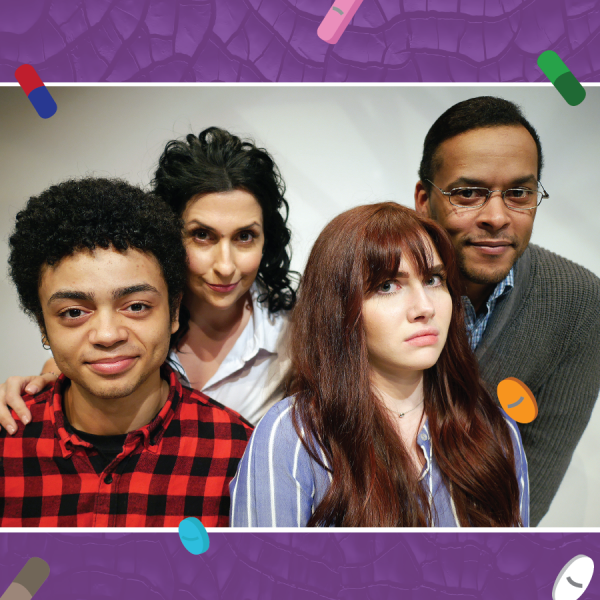 The rock musical Next to Normal, with Music by Tom Kitt, and Book and Lyrics by Brian Yorkey, opened to a full house last weekend.

The talented cast gave an unforgettable and poignant performance of an important and disturbing work that does a deep-dive into the morass created when a family member suffers from mental illness.

Janine Mercandetti credibly and dynamically plays Diana, the mother who suffers from bipolar disorder. She initially fools you into thinking she is “quirky” – staying up until 3 am to wait for her son to come home, getting flustered while making sandwiches for her family. It isn’t until her husband (J. Simmons), gently and patiently collects an entire loaf’s worth of sandwiches that she has amassed across the floor that you realize that there is a serious and ongoing problem. Diana is an intelligent woman who courageously faces her affliction, usually head-on, and often with humor.  Try though she might, she is not always successful at functioning, and maneuvering her way through life's roller coaster, mixed in with those weekly doctor appointments and mountains of pills.

As Dan, J. Simmons gives a strong performance as the patient man who still loves his wife Diana but has lost his own bearings. He knows he loves and needs her, he tries to protect and do the best for her, but the constant barrage of uncertainty and problems stemming from Diana’s illness has unraveled their marriage.  He wonders how the two of them have lost their way as a couple, but he perpetually holds hope for a return to who they were before his wife’s illness owned her.

Daughter Natalie (Haley Knips) suffers possibly the most from her mother’s illness. In families where one member’s needs weigh heavily, it is often the children or siblings of that person who suffer most from the fallout of the illness. The song “Superboy and Invisible Girl” speaks to her frustration that no matter what she does, her achievements go unrecognized, and her needs remain unmet. Knips offers a touching portrayal of a teen ricocheting between anger, frustration, and guilt, to love and fear.

In Natalie’s boyfriend, Henry (Evan MIller Watelet), we find a young man who, in understanding the pressure of Natalie’s life, matures and transforms from bad influence to protector and confidant.

As son Gabe, Zachary Jones deftly portrays a young man fighting for his own place in the family.  The secret carried within him has a ripple effect that threatens to destroy them all.

Carl Del Buono plays Dr Madden and Dr. Pine, two separate physicians trying treatments on Diana like shoe salesmen try fitting shoes. If the first six don’t work, the seventh one may…or not. A question of ethics and infallibility of doctors comes into play as the family trusts the doctor’s advice on treatments that hurt rather than help, and we see firsthand what an inexact science medicine can really be.

Across the cast, the musical talents are plentiful. The score, which won a 2009 Tony for Best Musical, offers many opportunities for the cast’s voices to soar in melodic song, as well as segments where their voices escalate in vibrant tension, just as the play’s characters do. Kudos to Music Director Andy Pratt, for this could not have been an easy score to undertake.

The white and dark set, designed by Eric Williamson, reflects the stark reality of bipolar disorder with its alternating bright and somber mood episodes. In the outlines of houses on the back walls, three on one side, four on the other, each with a darkened window, Williamson encourages us to try to look beyond the panes and see into the windows of the souls of those actually inhabiting the house, as well as those inhabiting only in memory.

Kerry Young  handles direction of this emotionally intense play with sensitivity and finesse.

Those who have experienced mental illness or health issues that swallow the entire family will likely find that Next to Normal echoes very, and perhaps uncomfortably, close to home. They may even find solace and vindication. For those who are fortunate to have escaped the experience of mental illness, Next to Normal offers an authentic and sympathetic look at a family wrestling with demons. It is beautifully acted, sung, and directed. Just a word of advice: don't forget your tissues.

Next to Normal can be seen onstage at Blackfriars through February 23. Click here for tickets and more information.