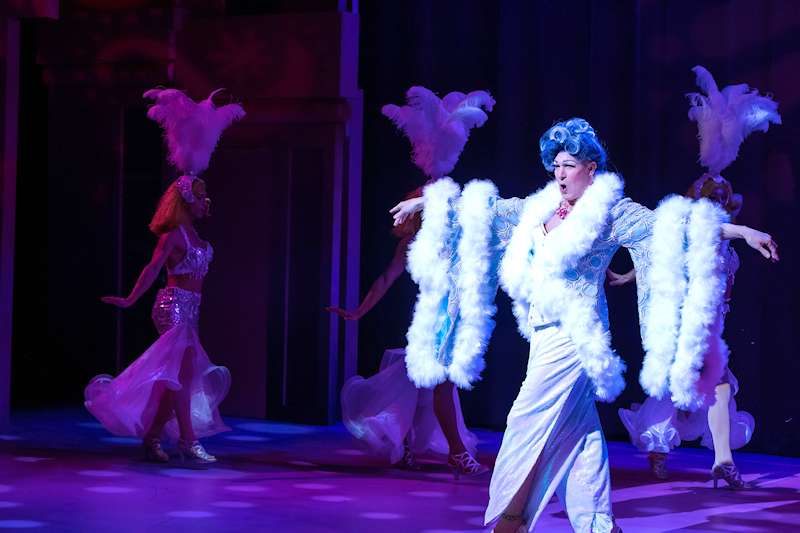 When La Cage Aux Folles originally appeared on Broadway, it was an anomaly. Although it was a “traditional” musical with strong book by Harvey Fierstein, beautiful lyrics and music by Jerry Herman, magnificent dance numbers and flashy costumes, it was a love story about a family headed by a gay couple…in an era when the AIDS epidemic had increased homophobic sentiments and American culture had not yet embraced Pride culture. That this show managed to find its way to Broadway, receiving nine Emmy nominations and winning six awards, including Best Musical, is an incredible tribute to the original creative team and producer.

Geva Theatre Center's La Cage Aux Folles opens when Georges’ son, Jean-Michel (Michael Evan Williams) comes home to tell Papa Georges (Mark Cuddy) he has just gotten engaged. This news sets off a flurry of activities, both funny and poignant. Papa Georges and Albín (Danny Vaccaro), Georges’ long-time spouse who is the club’s star Drag Queen performer ZaZa, wonder where they “went wrong” and why Jean-Michel would want to marry a woman. The apartment redecorating goes into overdrive, and identities are camouflaged in order not to offend Jean-Michel’s staunchly conservative, homophobic future in-laws, the Dindons.

If you’re a fan of Geva, you know this company goes all out, and La Cage Aux Folles is no exception. When the curtains rise on Georges’ elegant St. Tropez nightclub (scenes designed by Adam Koch), the club’s lusciously-costumed chorus line Les Cagelles step out in force fantastique as they join Georges in the opening number that heralds the (eventual) entrance of ZaZa.

Danny Vaccaro as Albín /Zaza gives a deeply-nuanced performance, showing richly-textured emotion. In one vibrant character, Vacarro morphs from aging drag Queen who fears spousal infidelity, to dynamic, larger-than-life onstage performer, and from fiercely loyal, loving spouse and mother, to the embodiment of LGBTQ Pride. Vaccaro’s vibrant voice and presence can’t be upstaged, even by Les Cagelles, whose song and dance numbers are simply sensational.

As Georges, Mark Cuddy gives a finely-tuned performance as the loving, caring, and patient spouse of Albín. When his love for Albín is challenged by his love for, and desire to please his son, we genuinely feel the torture Georges experiences in trying to find a compromise that will satisfy them both. The “compromise,” in which Albín attempts to become a more masculine “Uncle Al,” in order to fool the Dindons, is divinely funny. During the enchantinig and spirited soft-shoe number between Georges and Albín, we get a peek at the dapper couple they were when they met in their youth. 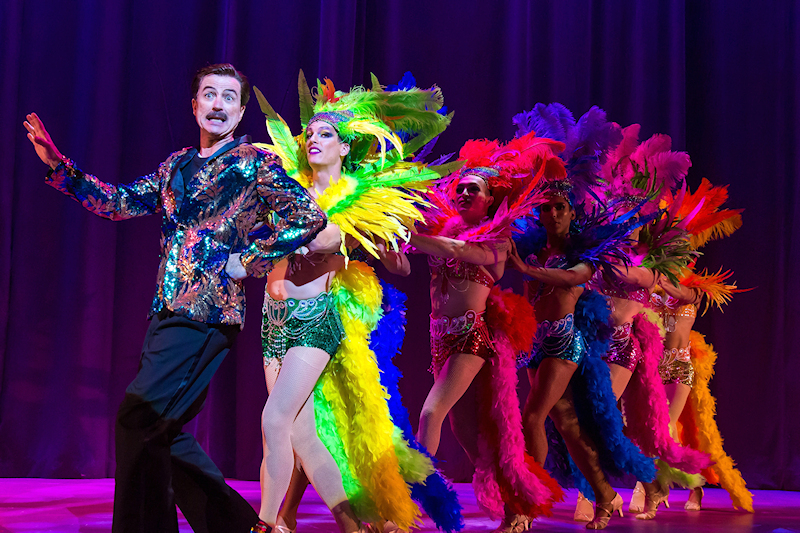 Kevin Curtis plays Albín’s flamboyant maid/butler with relish and tremendous comedic flair, as s/he (mostly) looks after mistress ZaZa’s best interests, while vying for a spot in the chorus line, in the hopes of also becoming a star.

As the loving young couple Jean-Michel and his fiancée Anne, Williams and Paige Sylvester are charming. We're angry at Jean-Michel for overlooking how Albín will feel at being left out, and for being ashamed of the only person he's called "Mother" over the years. Yet shame is a universal emotion, and many in the audience will recall uncomfortable moments in their own lives when they've been similarly heartless for reasons that seemed reasonable at the time. Thankfully, Jean-Michel comes to his senses. We get the feeling Anne has never lacked hers, as she refuses to obey the severe Mr. Dindons’ (James Michael Reilly) command to break off her engagement and leave her fiancé’s home of “ill-repute.” She announces she plans to go forward with the marriage, despite her fathers' edict, and she loves the family for exactly who each is.

Geva's La Cage Aux Folles is artfully and sensitively directed by Melissa Rain Anderson who skillfully cultivates the chorus line of emotions within the work. With stunning costumes by Kevin Copenhaver, over-the-top dance numbers choreographed by Sam Hay, and musical direction by Don Kot, this production is a celebration of musical theater at its most joyous. You won't want to miss this glittering, funny and deeply touching story of love and family, and the lengths we are willing to go for love of family.

La Cage Aux Folles can be seen on Geva's Wilson stage through October 6.