The Easiest Bread To Bake With Kids: Artisan Bread | Kids Out and About Pittsburgh

The Easiest Bread To Bake With Kids: Artisan Bread 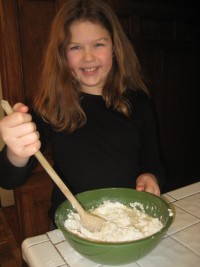 The Easiest Bread to Bake with Kids

By Debra Ross, from the Perfect Loaf of Bread recipe at Sullivan Street Bakery

I love a good loaf of crusty bread. I should probably love it less. But until this week, I was too intimidated to try it at home: all that kneading, all that letting-it-rise-perfectly, all that timing, all that care with temperature and crust. I was content just to buy it from Wegmans. I never begrudged them their $2.25 for a lovely loaf. BUT... what about if I could make just-as-good bread, or better yet, what if my kids could make just-as-good bread, with about five minutes of work... and at less than 50 cents per loaf? I'm sold!

I was skeptical when I heard about this recipe. Could it really work? The only ingredients are three cups of flour, 1/4 teaspoon of yeast (yes, that's it), 1 1/4 teaspoons salt, and 1 1/2 cups water. But yes, yes it did.

There are some things to remember as you're baking:

1) The dough looks and acts more like batter than dough the whole time.

2) Follow the recipe and directions exactly. I usually tend to think that more of a good thing is a good thing, so I toss it in. Not so in this case. The instructions are easy and simple. FOLLOW them.

3) Except you don't need to follow the rising instructions to the minute. We let our bread rise for almost 24 hours (partly because we have a sort of cold house). Not sure it was necessary for it to go so long, but it worked great.

Madison dumped the ingredients into a bowl and mixed them. It looks like a very loose dough or a strong batter. It rose for an entire day. Then we turned it out onto a towel, folded it a few times (I say "folded," even though battery dough doesn't fold easily), and let it rise again. Then using well-floured hands we picked up the mass and put it into the preheated dutch oven, put the lid on, and let it bake (at 450!) for half an hour. Then we took the lid off and finished off the baking. We followed the advice of a friend and let the bread rest for an hour before eating. And BOY was it great. 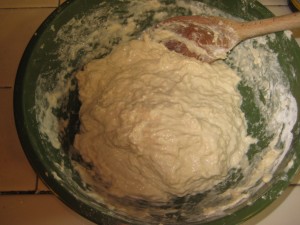 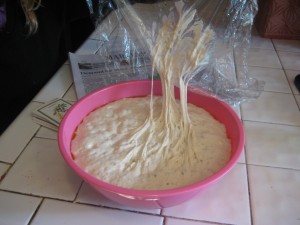 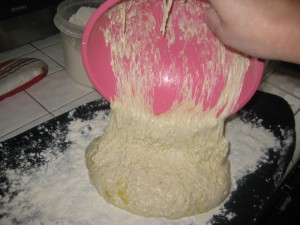 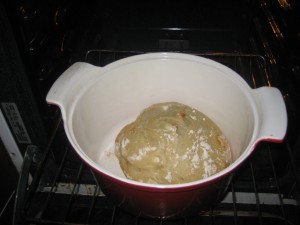 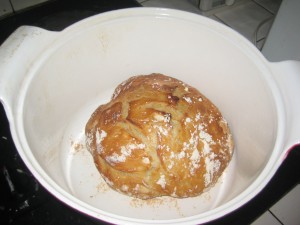 Thanks to Christine's blog for pointing me to this recipe.